Why Nike Air Jordans Are So Expensive? Costly Nike Sneakers 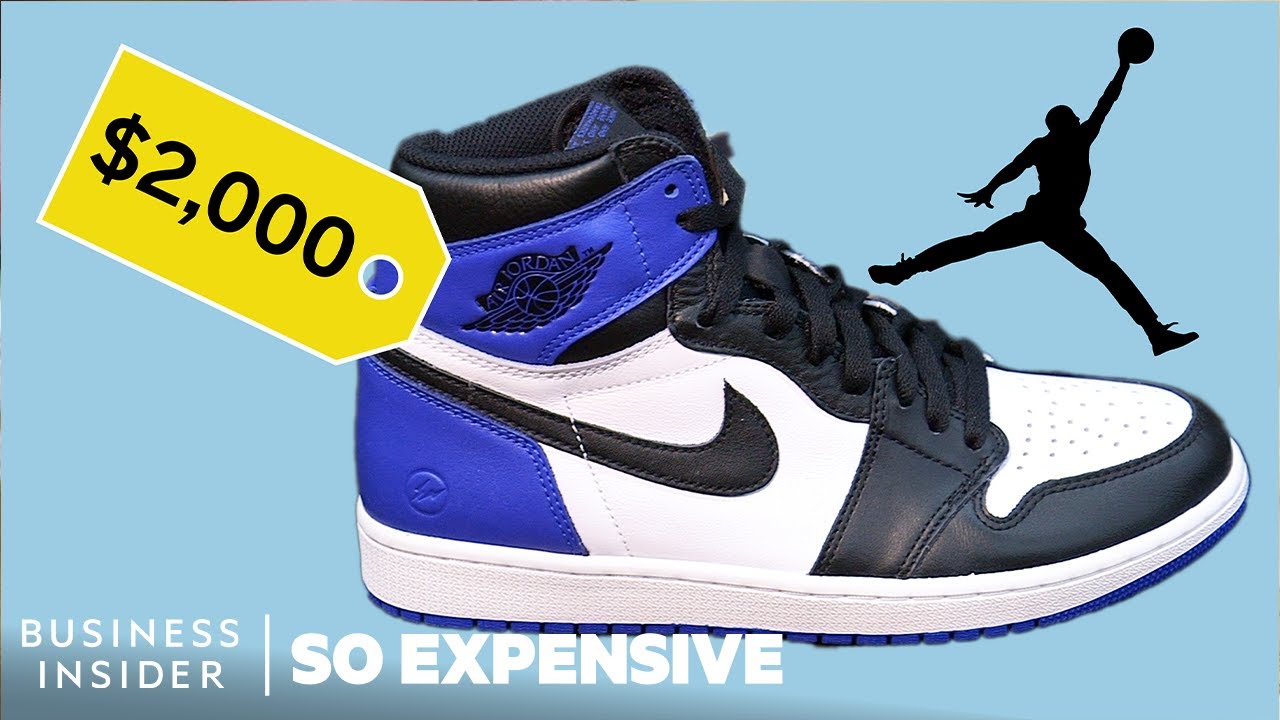 This is the Jordan 1 Retro Fragment. It originally retailed for $185 in 2014. But today a pair can resell for up to $2,000. And this is the Yeezy Boost 350 V2 Core Black/Red, which retailed at $220 in 2016 and now resells for $900. The Fragment’s resale value more than doubles its competition. These shoes were both sold in limited releases, so why did Jordans become so much more expensive? It all has to do with the value of the Jordan brand and how it makes and markets its iconic sneakers. Matt Powell: The fact that it’s made in China where the tariffs are higher, made in the best factories, made with more material (basketball shoes tend to use more material than a running shoe), and then trying to be as close to the original product are all things that have driven prices up there.

According to Matt’s research, the average price of a basketball sneaker is about $110, while a Jordan’s average price is about $145. To understand why Jordan Brand can charge more, let’s go all the way back to the beginning, before the Jordan 1 was introduced. Before the 1984-85 season, Nike signed an unproven MJ to a five-year deal worth more than three times the richest contract at that point. But that wasn’t the only unusual decision Nike made while launching the Air Jordan brand. The Air Jordan 1 swapped the standard white upper for a black one, which violated the NBA’s uniform policy and resulted in a $5,000 fine per game. Announcer: On September 15, Nike created a revolutionary new basketball shoe. On October 18, the NBA threw them out of the game. Nike recognized this unique marketing opportunity and footed Mike’s bill as he went on to win Rookie of the Year, playing every game in his banned namesake sneaker. Amir Ismael: It just showed that he was rebellious, and it was something that people gravitated to, and they wanted to wear them too. It was like first sneaker that really shook up sneaker culture. I think it’s the shoe that catapulted sneakers to where they are today, because it was the first shoe that people saw and wanted more than the average shoe.

Mike’s success as a rookie made a big impact on Nike’s bottom line. The original Jordan 1 hit stores across America in March 1985, priced at $65. And at the end of the year, the Air Jordan franchise had made $100 million in revenue. The Air Jordan 2 wasn’t as successful. After just 18 games in his new design, Jordan suffered a season-ending broken foot. Reports surfaced about Mike being unhappy and looking to jump ship to Adidas. The Air Jordan 3 became a crucial crossroads for Jordan and Nike. Enter Tinker Hatfield. Today, he’s known as the architect of modern sneaker design. Back then, he was known for innovating Nike’s Air Max technology. His Jordan 3 design became legendary. It pioneered the first-ever mid-cut basketball sneaker, included elephant-print overlays, and immortalized His Airness in the Jumpman logo. And Tinker incorporated his Air Max technology into the sole. Matt Cohen: Those three things, I think, brought its cultural importance because it was a statement shoe, right? So now you’re actually making a statement by wearing a basketball shoe, which wasn’t necessarily the purpose of wearing a basketball shoe off-court.

The company’s rollout of the Jordan 3 was equally as legendary as the design. Nike’s marketing team connected Jordan with Spike Lee for what would become some of the most memorable commercials in history. Spike Lee: You know how I get up from my game? Do you know? Do you know? Do you know? That’s right, Air Jordan, Air Jordan, Air Jordan. Powell: You really saw the Jordan brand become a luxury brand in the United States. It was our designer sneaker, and it made the shoes very visible, and that’s a big part of conspicuous consumption is to be able to look across the room and see that that person’s wearing a $100 shoe, or $300 shoe in today’s parlance.

During all this, the price of Jordans had jumped to $100, significantly higher than the top basketball sneaker at the time, Converse’s Weapon. Jordan marketed its sneakers as a luxury product, to match MJ’s talent and style, and in the process created a cultural phenomenon, bringing sports apparel into the mainstream. Cohen: He was a very marketable figure, with a great smile and a big hoop earring, and people wanted to look like him. And so you started seeing this face all over the world.

But the brand priced out kids from low-income families who wanted them the most. And by the ’90s, Jordans were so coveted, violence erupted around them. Two teens were even killed for their Jordan sneakers. Nevertheless, the phenomenon continued. Jordans were a status symbol that couldn’t be stopped. Ismael: Whether you’re into fashion, whether you’re into sports, or whether you’re just a fan of Michael Jordan himself, you have to know about Jordan Brand, you have to own something from Jordan Brand. Hatfield continued to design Jordan’s signature sneakers for the next 12 years. The Jordan brand became a sneaker giant, and MJ became the greatest player in basketball history. Their run lasted for more than a decade, but that was all about to change. In 2013, Adidas released new technology, signed Kanye West, and started making big gains. Despite increased competition, Jordan’s prices stayed high. That year’s new Jordans retailed at $250, the highest price for a new signature Jordan released at that point. Retro prices jumped too. A retro is a rerelease of an original shoe. A Sneaker Life: $220 for these, $400 for these.
Cohen: This happens with every sneaker brand. As they see the resale prices of their shoes go higher, they want more of the pie, and so they started to try and get more of the pie.
Ismael: When Adidas came out with a lot of their more popular styles during that era, it caused a lot of people to just say, “I’m gonna stop buying Jordans for right now, and I’m gonna focus on these newer styles that are comfortable, that are cool, that are trendy.”

Jordans weren’t selling out as fast as they had in previous years, and Jordan increased supply to balance out revenues. But it oversaturated the market. According to Sole Collector, between September and November 2017, Jordan released 30 different retros. The price hikes, combined with an oversaturated market and increased competition, led to what Sole Collector called “Jordan Fatigue,” and Adidas’ market share nearly doubled. Jordan Brand President Larry Miller admitted that the brand had released too many shoes and needed to figure out how to connect to young consumers again. And Nike CEO Mark Parker did just that with his edit-and-amplify strategy. He helped Nike R&D cut down from 350 sneaker ideas to 50. This helped the company be more disciplined and catch up with the speed of the sneaker market. Powell: The secret sauce for Jordan over the years has always been unrequited demand, never having enough shoes to satisfy the market, which made the kid come back on the next release and hope that he would get a pair.

Jordan mounted its comeback in 2018. The brand ramped up offerings for female customers, and its Concord 11 Retro release was its most successful shoe introduction ever, according to Parker. And they’ve been able to connect to a new generation, tapping Travis Scott, Virgil Abloh, and more to offer their takes on the historic designs. Powell: Today you don’t really need to market a Jordan product, and so it becomes a pull market. The idea is that the product is so sensational, so wanted by the consumer, that it’s pulling them into the store.

The brand is pulling in customers like the old days, and according to Parker, Jordan 1s are more coveted than ever. Resale info backs that up. Remember that comparison we did at the beginning? It looks like Jordan is getting the balance just right between nostalgia and innovation. A Sneaker Life: This has to be my favorite sneaker of all time. This is the Air Jordan 4 White Cement. Just Souled Out: The Aleali May Jordan 1 Viotech. Jacques Slade: The Air Jordan 1. It represents the beginning of Jordan’s career. Just Souled Out: I think it’s interesting to see how the Jordan brand continues to evolve as it ventures deeper into the women and unisex market.
A Sneaker Life: You know, it just reminds me of my childhood. This is really what got me into the sneaker game. Jacques Slade: It’s the reason why a lot of us sneakerheads exist. And this Lakers colorway, man, that’s just perfect.
Ismael: The Jordan 1 is, like, the shoe that sparked sneaker culture as it is today. I think that’s the main shoe that created some sort of frenzy or connection to shoes versus “this is a cool shoe I want to wear.” It was something people could really connect to.