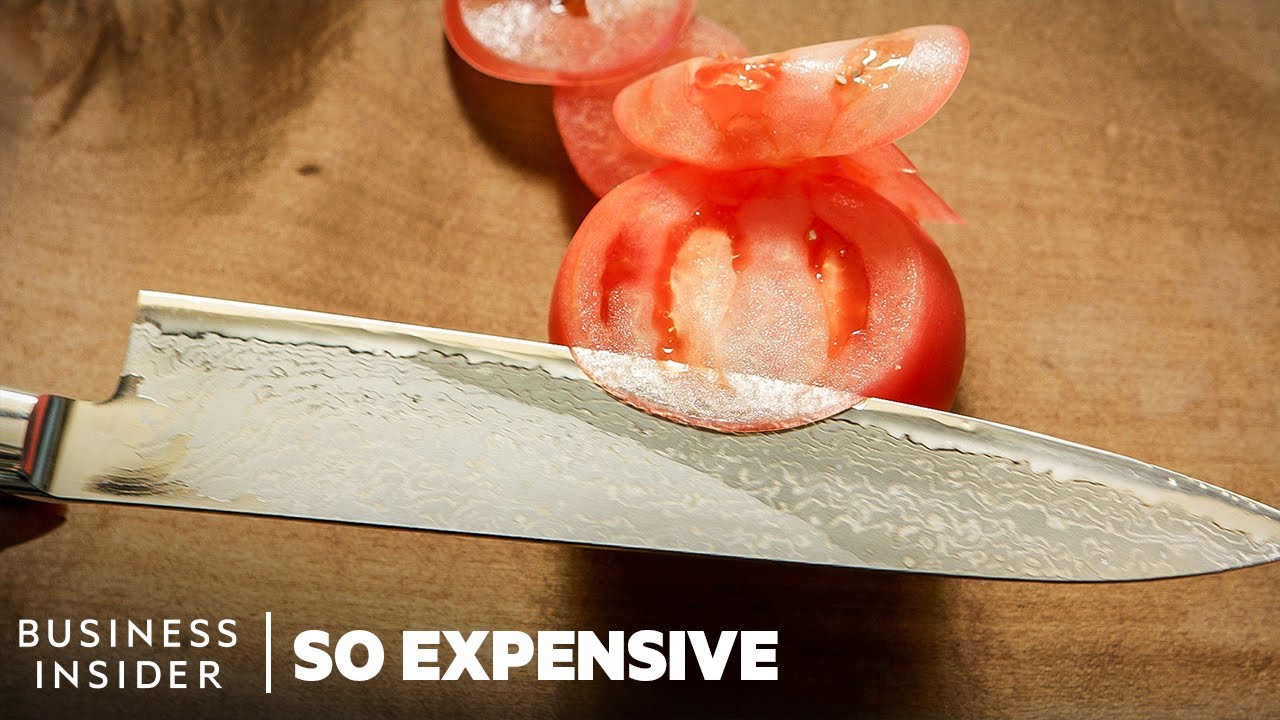 Japanese chef’s knives are world-renowned for their unique design and durability. And just one can cost you over $900. From heating and hammering the metal to sharpening the knife’s edge and polishing the final blade, these are only a few of the skills a Japanese artisan spends a lifetime learning to master.

So what makes these knives so coveted? And why are they so expensive? Terukazu has spent 37 years crafting chef’s knives
at his family’s factory in Echizen. Each one goes through 100 production stages. It’s a process that requires over 10 years of practice.

Compared to popular European chef’s knives, Japanese blades are lighter and sharper, allowing for more precise cuts.
On the low end, most Takamura blades cost a couple hundred dollars. But custom-made pieces can sell for 15 times that. One of the most expensive knives produced by the shop sold for $6,900.

Takamura Hamono was one of the first knife makers to use a certain kind of stainless steel called high-speed powdered steel. It was originally designed for power tools, like saws and drills, because of its durability and strength — two qualities Japanese chef’s knives are known for today. Once the metal is cut, it’s heated in an electric oven to harden and strengthen the blade. Then the hammering begins. At this point, the artisan relies on experience and instinct to guide them in producing a blade of ideal strength and thinness.

Hammering leaves behind circular indents, something knife makers in the past typically polished away. But 60 years ago, Terakuzu’s father and his colleagues discovered the benefit of knives with a textured surface, like this. This hammered finish, called Tsuchime, allowed chefs to chop ingredients quickly and more efficiently. It also added a beautiful aesthetic to each blade, another element highly valued in Japanese knives. But a Japanese chef’s knife wouldn’t be nearly as valuable without its supremely sharp edge.

An artisan presses the blade against a rough grindstone made of natural rock, a sharpening material you’ll only see used in Japan. This step distinguishes an artisan’s skill and ultimately sets a knife’s final value. It takes one full day to sharpen the blade and another full day to secure and polish the handle. The final knife is totally unique — each with its own distinct balance, thickness, and design. Several of the world’s best chefs use Takamura’s knives, from René Redzepi at Noma to Massimo Bottura at Osteria Francescana. Another one of those chefs is Masakazu Fujii. He uses Takamura’s knives to prepare fish at his restaurant in Fukui.

Echizen has been the center of high-quality-knife making since blacksmiths began crafting chef’s knives here 700 years ago. And today, the city is internationally recognized for its cutlery production. But before knives, artisans made swords — another valuable trade in Japanese culture. Despite dedicating decades to this craft, Terukazu and his brothers weren’t always set on becoming master knife makers. Professional chef or not, getting your hands on one of Takamura’s knives could take years. With that kind of wait time, coupled with the decades of training required to master this craft, it’s likely these pieces will remain costly for years to come.