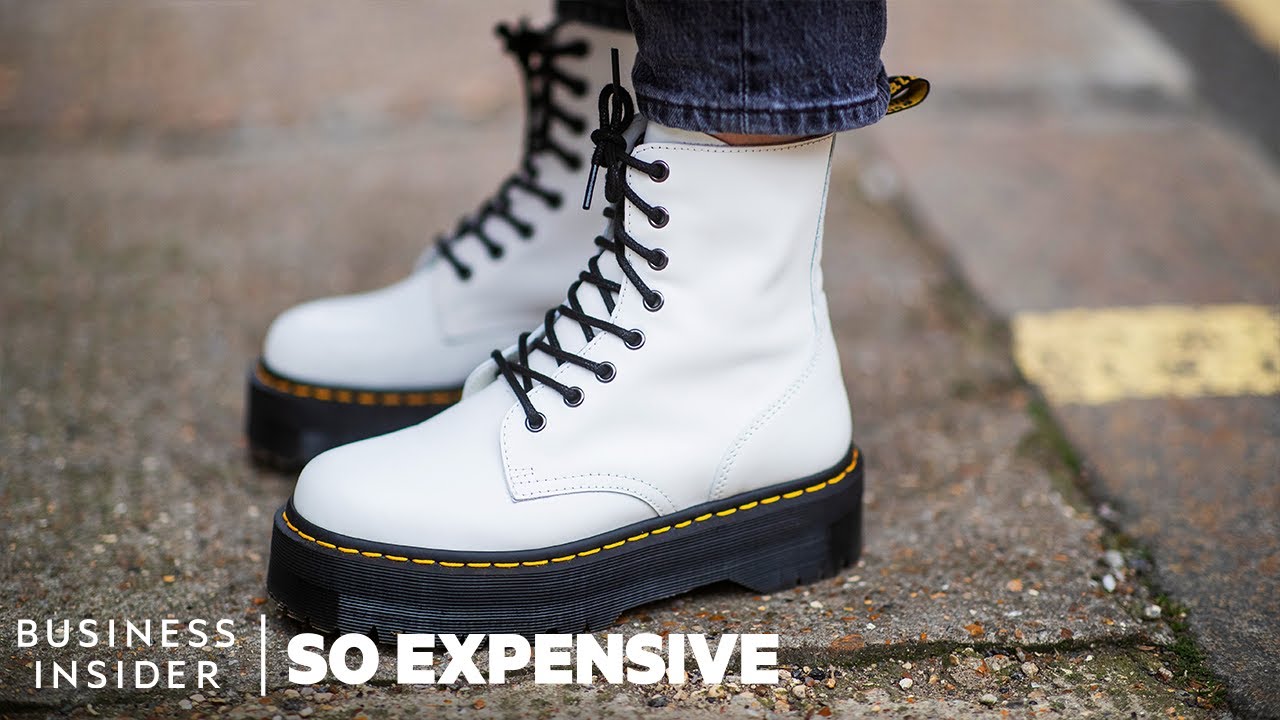 When Doc Martens first appeared in the UK, in 1960, they were working boots that would cost you under $3 a pair. These days, a pair of Made in England boots could set you back $225. So, what has changed? And why are these shoes now so expensive? Doc Martens are a style icon that has endured for over 50 years.

They’ve been worn by everyone from Kanye West and Cardi B to the Dalai Lama and even Pope John Paul II, when the Vatican placed an order for the famous eight-eyelet boot in black, white, and navy leather. While a pair of Docs may not be the most expensive boot out there, their price and use has gone through a pretty radical transformation. And the company producing them has shifted dramatically too, from a family-owned local factory to an international fashion brand owned by a private-equity firm.

Since 2014, the price of boots has risen by almost 25%. Sales have grown year and year, and profits were up 70% in 2018 to ’19. So how did the company go from its humble beginnings to producing 7 million pairs of these shoes each year? Before they got their punk image, Doc Martens weren’t quite so cool. The patented technology behind the boots, the air-cushioned sole, was invented in 1945 by Dr. Klaus Maertens, a German army doctor who injured his ankle in a skiing accident and was looking for a comfortable alternative to hard leather-sole boots.

The market for this new shoe technology wasn’t the punks or skinheads you might associate with the history of these shoes, but older women in need of comfortable and practical footwear. They were even advertised as perfect gardening shoes at one point. It was when this technology was brought over to the UK in 1960 that the iconic shoe you might recognize was first made. The air-cushioned sole was licensed to the Griggs company in Northampton, and the 1460 boot was created. The iconic stitching and recognizable heel loop were added, and the boots were sold to factory workers across England. At the time, these boots cost only $3 a pair. Even with inflation, that’s just over $50.

They were cheap, hard-wearing, and perfect for postmen, policemen, and workers on their feet all day. The boot was quickly adopted by any countercultural movement that appeared, and they became a mainstay in glam, punk, skinhead, ska, and goth style, among many others. Doc Martens’ fashion status wasn’t always guaranteed, though. After the boom in the ’90s, the boots dipped out of fashion, and the company struggled, almost going bust in the early 2000s. As the industry shrank, the cost of manufacturing shoes in England also got more expensive. And by 2002 it already cost around $87 for a pair of Doc Martens. That’s around $140 with inflation. Northamptonshire was once the home of shoemaking in England. In the mid-19th century there were over 2,000 shoemakers working in the region. But as many of these shoemakers struggled, the majority went under or moved production abroad, and now there are just over 30 left. Doc Martens followed suit, moving their production to Asia.

The company still makes shoes in its Northamptonshire factory, but now this is only around 2% of its total production. Doc Martens says this relocation hasn’t changed the way its shoes are made at all. We wanted to see if there actually was a difference between the new Asian-made boots, the more expensive Made in England variety, or a vintage pair from before the move. We spoke to someone who’s torn down multiple pairs of these shoes to find out. I’m Weston Kay, I’m a professional leatherworker, and I cut boots and shoes in half on YouTube. Yeah, I would say the production methods are really similar between the Asian-made boots and the Made in England boots.

A lot of the same features on the inside of how they stich their boots are identical. Their construction’s really similar. They still heat-sew the sole to the welt. I think a lot of the big differences between the vintage boots and the newer ones, it’s stuff that you would only notice if you cut it in half, almost, or if you wore them for long enough time. The vintage Doc Martens had a way better midsole that adds a lot of comfort, they had a wooden shank, and the leather was just a lot better. So they lasted longer, they’re more comfortable, they have the support you need. The newer ones just have worse versions of the old ones’ materials. I wouldn’t describe them as a super-durable or long-lasting boot, but a lot of people are just buying these boots because they’re Doc Martens anyway.

And they’re gonna be comfortable, they’re gonna last a decently long time, so most people are gonna be happy with them. We contacted Doc Martens about these comments. And their spokesperson told us: Regardless of the materials, Doc Martens’ style has endured. And since 2002, the brand’s popularity has skyrocketed. The countercultural image that made it so famous is something that has stuck to this day, despite the expansion from small-town British-made boot to international icon. And for fans of the boot, this can be an obsession. Over the years, the company’s evolved from producing one boot in 1960 to producing around 250 styles each year.

And as its popularity has grown, so has the competition. Over recent years, Doc Martens has filed lawsuits against Urban Outfitters, Vans, Boohoo, and others in an attempt to protect its iconic boot design. In 2014, the company was sold by the family and bought by private-equity firm Permira. Since this takeover, the price of boots has risen by almost 25%, and profits were up 70% in 2018 to ’19, in large part due to the newfound success of their vegan range. And while the boots have transitioned from an English worker’s boot into a global fashion icon, their style has endured, and their devoted fan following isn’t going anywhere.