Why Bluefin Tuna Is So Expensive in the World 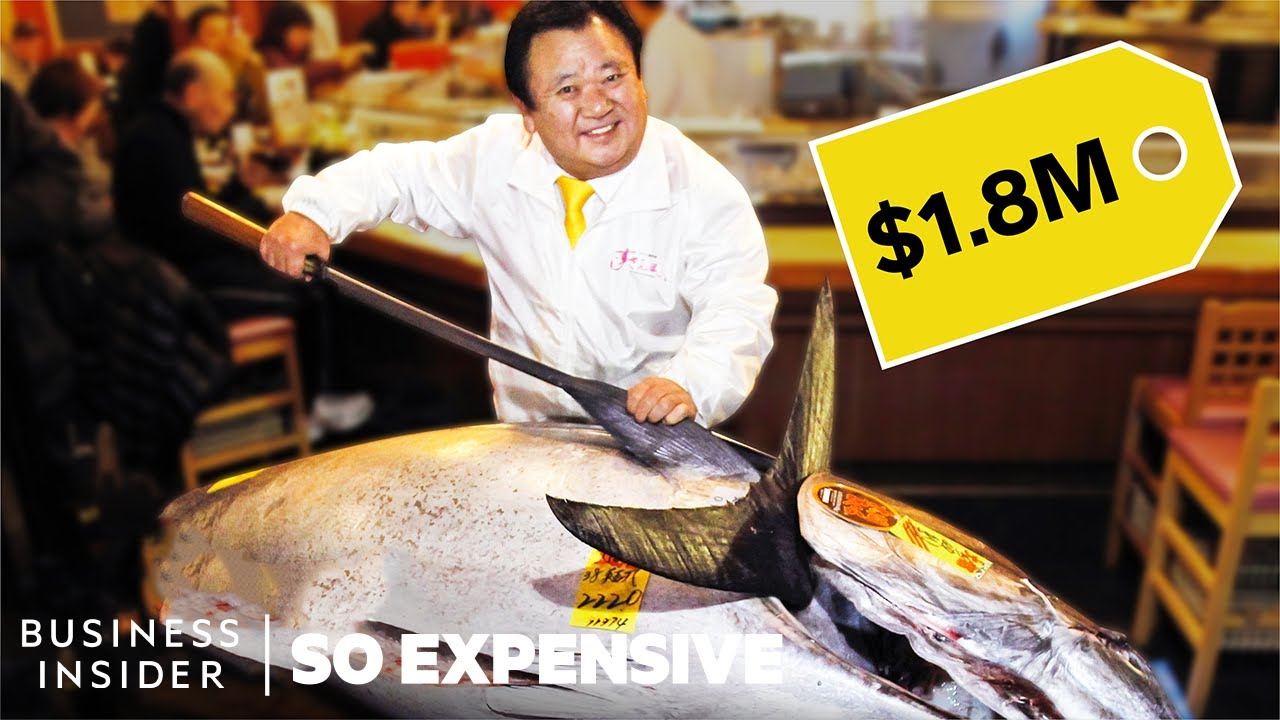 In 2013, a 489-pound tuna sold for a whopping $1.8 million. But you can buy a can of tuna fish at the grocery store for under $2. So, what’s the difference? For starters, it’s not the same fish. Canned tuna typically comes from albacore. They’re small, grow fast, and are abundant for fishing. And they certainly don’t weigh 489 pounds. There’s only one type of tuna in the world that grows that big, bluefin tuna. And if you wanna try some, it’s gonna cost you. Derek Wilcox: We could buy tuna from Japan that we’d have to charge maybe $80 for one piece of Otoro.

Derek Wilcox is a chef at Shoji, a Japanese restaurant in New York. He was trained in Japan and worked there for more than 10 years. Restaurants like Shoji serve raw bluefin tuna, or what’s called kuro maguro in Japanese. They get their tuna from a number of different sources, including Japan’s Tsukiji fish market. There are several different varieties of tuna, but bluefin is what you’re most likely to find at high-end sushi restaurants. Wilcox: Bluefin is the most sought after. Only bluefin has the intense marbling. Bluefin also, when it’s aged properly, has a particular balance of flavors.

A large adult bluefin can weigh around 450 pounds or more, and the price of the fish varies based on a number of different factors. Wilcox: It completely depends upon where you get it from, but it’s never cheap. A local bluefin on the east coast will run anywhere between $20 and $40 a pound. You could be paying north of $200 a pound for bluefin from Japan.

According to Wilcox, tuna from Japan is better than American tuna during the peak winter months. While Boston tuna is best during summer and fall. But it’s the tuna that comes from Oma in Japan that’s widely considered to be some of the best in the world. Wilcox: Peak-season Oma tuna will, in Japan, cost 400-450 a kilo. Which means by the time it gets here, it’ll cost close to $400 a pound.
Besides its superior fat content, another reason fish is more expensive from Japan is that it has further to travel, and it goes through a rather lengthy process before making its way to your plate. There’s more hands that it passes through in Japan, which is not necessarily a bad thing.

Wilcox says the fish is also handled better in Japan than the US. So there’s less damage and more precise cutting. Wilcox: We get like a Boston bluefin, it goes from the fisherman, to the distributor, to our door. Whereas in Japan, it’s going from the fisherman, usually to a collective or cooperative, to the government that’s running the auction, to a middle wholesaler, to a final wholesaler, to a restaurant or a hotel. All high-end fish are auctioned in Japan. Fish that’s more sought after, that’s caught in a better place, that’s handled better, that’s clearly better quality will go for a higher price, and that fisherman will get more of the money.

The first auction of the year in Japan is when you’ll see ridiculously high prices for fish. Mostly as a symbolic gesture, or a publicity stunt. Which is partly why the 489-pound tuna sold for $1.8 million in 2013. And the first fish of 2018 sold for $323,000. Wilcox: In Japanese culture, that first thing you do all year is the most important. It sets the tone for the whole year. That first tuna of the year always goes for the highest price that any tuna will go for the whole rest of the year. And the different parts of a bluefin tuna also vary drastically in price. Wilcox: If you imagine a tuna as like a torpedo, they’ll split it into quarters lengthwise, cut off the head, and the collar, and we will take one of the two belly quarters. Here’s what one quarter looks like when it’s delivered. This piece came from Boston, and was caught the previous day. Wilcox splits up the meat based on type. Wilcox: It’s just like sides of beef. You know, you buy a side of beef, it’s all the same, but once you break it down, the filet ends up being the most expensive part, because it’s the most desirable. It’s also small, and it requires a lot of labor to peel off the silver skin.

Otoro is the fattiest part of the tuna outside of the head and collar area. This is the most expensive. And depending on where it’s from, and where the fish was raised, the price can vary anywhere from $10 a piece to upwards of $80. Wilcox: The chutoro is getting around toward the side of the tuna, and it doesn’t have the striations of fat, but it still has fat within the red of the meat, so you get a mix of fat and red. And then, akami which means, literally, red meat in Japanese, is the leanest part which you find more towards the center of the tuna closer to the backbone.

Akami is the most common and cheapest part of the fish, but it’s still more expensive than that can of albacore at your local market. Wilcox: When you’re assessing the quality of the tuna, you wanna taste the red meat, the akami. It’s a wild animal, so it tells you whether it had a good diet, whether it had a good life, and it got exercise, and it lived in clean waters, and was able to swim around a lot. So, a farm-raised tuna is, generally, force-fed sardines, and you can actually taste sardines in the fat of a farm-raised tuna. Whereas a wild tuna has a varied diet, and has a much cleaner and milder flavor to the fat.

But for decades, wild bluefin tuna were over-fished in the Pacific, which was harming their population and making it more difficult to come by. However, more recently tighter controls on fishing have led to a resurgence in the population. But they could still be better, Wilcox says. In fact, Wilcox avoids any Pacific bluefin that is not from Japan, and says you should too. Wilcox: If you eat Pacific bluefin, not specifically from Japan, then that’s really irresponsible.