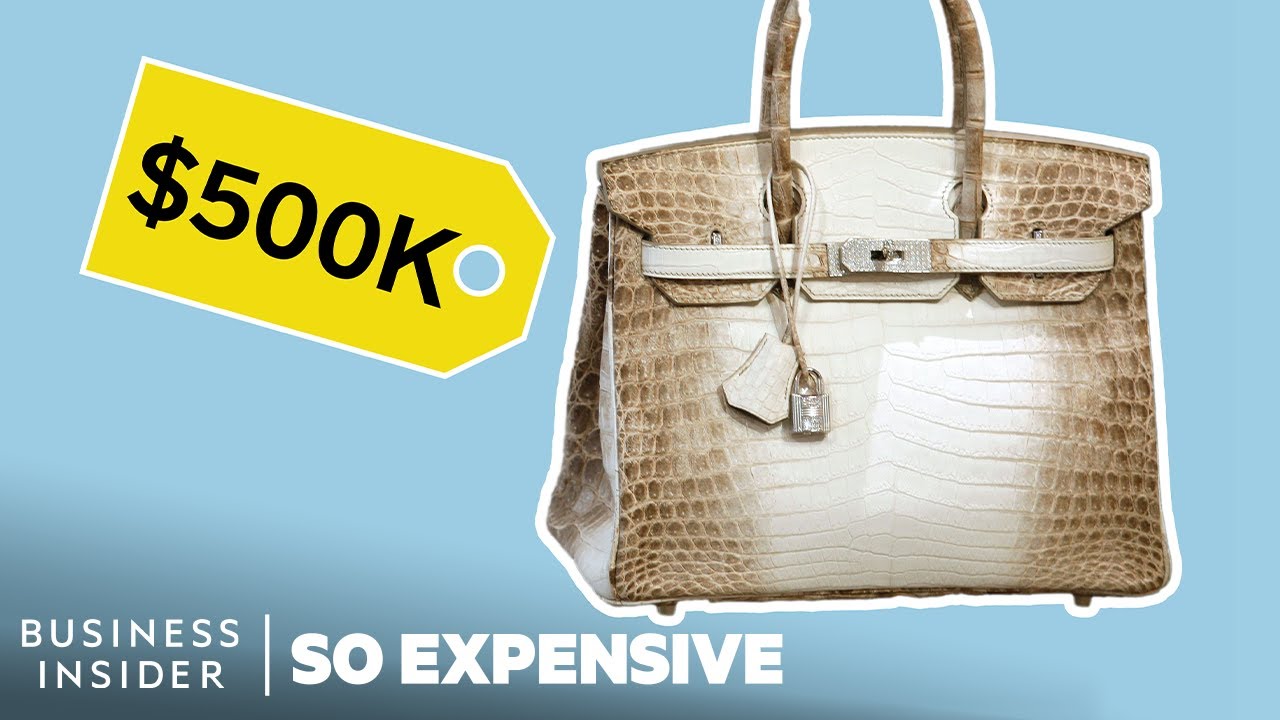 Hermès Birkin bags are some of the most expensive bags in the world, ranging anywhere from $9,000 to half a million dollars. The bags embody absolute luxury.
- A Birkin bag?
- You’ve heard of it?
- Of course.
That’s a very nice purse. The exclusive accessory’s even considered by some to be a better investment than gold or the stock market. And the world’s most expensive bag is an Hermès Himalaya Birkin bag that sold for $500,000. So what is it that makes Birkin bags so expensive? The story of the bag begins with its namesake: Jane Birkin. On a flight from Paris to London, the English actress happened to be seated next to the chief executive of Hermès, Jean-Louis Dumas.
Pilot: Flight attendants, please prepare for takeoff.

Jane was known for carrying a wicker basket wherever she went and used it for everything from groceries to diapers. When she tried to fit her famous basket in the overhead compartment, the lid came off, spilling the contents everywhere. Jane complained to her seatmate that it was impossible to find a weekend bag she liked. Dumas introduced himself as the head of Hermès, and the pair spent the flight sketching possible handbag designs on the back of an airplane sick bag. A year later, Dumas presented Jane with the Birkin bag, a spacious yet sophisticated leather design perfect for everyday use.

The Birkin’s pockets made it highly functional, and the bag seals to prevent anything from spilling. Hermès makes the bags in France using premium materials like calf skin, alligator skin, and even ostrich skin. Each bag is made entirely by hand. Although Birkins are one of the most exclusive and sought-after bags today, they actually weren’t all that popular when they first launched. It wasn’t until the ’90s that the Birkin became one of the it-bags of the era. Now they’re the ultimate status symbol. Victoria Beckham reportedly has a collection of over 100 Birkins, estimated to be worth over $2 million, and Singaporean socialite and entrepreneur Jamie Chua is considered to have the world’s largest Birkin collection with over 200 bags.

But you can’t just walk into Hermès and get one. While there used to be a wait list, nowadays all you can do is hope to be important enough or spend enough to be offered a Birkin bag. And if you’re offered one, don’t expect to be able to choose the color or size. Hermès also places limits on how many Birkin bags a client can purchase per year. This dedication to preserving the exclusivity of the bag has certainly paid off, and the disparity in demand and access has created a thriving resale market. A 2017 study revealed that the value of Hermès Birkin bags has increased 500% in the last 35 years, an increase of 14% per year. One of the most coveted models comes from Hermès’ Himalaya collection, which comes in three sizes. Often referred to as the holy grail of handbags, the white Himalaya Birkin bag features 18-karat white gold hardware and more than 200 diamonds. The 35-centimeter model in particular is very rare and has sold at record prices year after year. Most recently in 2019, it sold for over half a million dollars. Professional sports betting consultant David Oancea, also known as Vegas Dave, made the record-breaking purchase.
David Oancea: The reason I bought the Birkin bag is I love breaking records. I broke all the sports betting records, I wanted to break the most-expensive-bag record.

I’m all about raising the bar. Also, it’s about supply and demand. The only other one in the world is by Steve Harvey’s wife, so there’s only two in the world. Not even Kim Kardashian has this, so I actually bought it for content, believe it or not, so I could take videos with it, pictures of it, getting people to talk about me. The record-breaking sale actually took place over social media.
Oancea: Sale was pretty easy. I posted on social media, I have about a million followers, that I’m looking for a bag. This lady hit me up, Privé Porter. She messaged me, said she’d get me the bag. I realized it was the most expensive bag. She said it would break the record. And this is for sure the record, $500,000? – Absolutely, most expensive bag ever sold.
Oancea: We closed this deal in about three to four days, really, really fast. I actually do use the bag. Most people think I’m crazy. They put it away like in a safe, and they never touch it again. I’ve taken it out twice, once to a night club in Vegas as a great piece of content.

It’s definitely worth the cost ‘cause you could offer me a million dollars cash, and I wouldn’t sell it. My asking price is $2 million. If not, I’ll just keep the d—- thing. Narrator: It’s also made with white or albino crocodile skin, which is extremely rare. The costly skin is painstakingly dyed to emulate the snowy appearance of the Himalayan mountains.
Mason Howell: The high retail value and resale value is because these are pieces of artwork. These artisans train years and years to make one of these bags, and they may even train 10 years before even they’re allowed to make a Birkin.

Another reason for the bag’s high price of course is the limited availability. The total number of Birkin bags Hermès produces each year is a well-guarded secret, but it’s estimated that there may be around 200,000 in circulation. And for the luxury resale market, Birkin bags are a hot commodity. Online retailer Privé Porter uses Instagram and WhatsApp to sell the bags online, and luxury reseller The Real Real has hundreds of Birkins available at any given time, many of which are priced well above the original retail cost.
Howell: The Birkin bag does retain and sometimes exceeds its value. It really does depend on the leather, the color, the size of the bag, you know, the hardware. There are so many factors that go into pricing a Birkin that it could really vary.

However, if you do buy a Birkin, let’s say in 2004, and maybe the retail at that time was $5,000, you most likely will be able to sell it, even if you have worn it so many times, for $5,000, $6,000. Narrator: Even as resellers like The Real Real and Privé Porter have made more Birkins available than ever, the prices haven’t gone down. Howell: If you go to Hermès, you may not always get the exact color, size, that you want. Here, we have almost every single option, and if that means you have to pay a small premium, people and our clients are willing to do so. Even though that there has been such a saturation of these bags, not one bag is the same. So let’s say an Etain Birkin 35 with gold hardware, we only have one right now, and if it’s sold, we may not get another for a while, so someone’s looking for that, and they’d be willing to pay an extra maybe $10,000 to get that bag as soon as possible, and all these bags are handmade, artisan craftsmanship. It’s a piece of artwork. Not one is the same, not even one stitch. Narrator: So if you have an extra $10,000 lying around, it could be worthwhile to invest it in a Birkin. Just make sure that you’re not falling for a fake. From Canal Street in New York City to websites like eBay, the counterfeit market is full of luxury knockoffs, and Birkins are no exception.

Back in 2012, Hermès sued several websites for selling fake products and won $100 million in damages. That same year, French police cracked down on an international crime ring that was manufacturing counterfeit Birkin bags. The crime ring reportedly included actual Hermès employees. Only two employees were arrested, but Hermès believed that several other employees could have been involved. And despite all their efforts, fake products continue to flood the market. The quality of counterfeit bags has also vastly improved over the years, making it difficult to tell whether a bag is real or fake. However, there are a few tricks to spotting a fake Birkin.
Howell: The handle should never be too long. If they look too long, longer than the bag, then it is most likely inauthentic. The hardware shouldn’t be too shiny or protrude out, and the feet, another big thing, it’s one of the best things I always check, is that the feet should never screw off. They are hammered in. The leather itself should feel very supple, very luxurious.
And if the price seems too good to be true, it probably is.

While many other handbag styles have come and gone, it looks like the Birkin is here to stay. And the bag has become synonymous with status in a way that many other luxury goods have yet to. Despite its popularity, the bag features no prominent logos and is only recognizable to people who already know what it is. In Birkin, Hermès has created something that feels inaccessible and thus highly exclusive. As for whether the Birkin will always be so expensive, only time will tell.