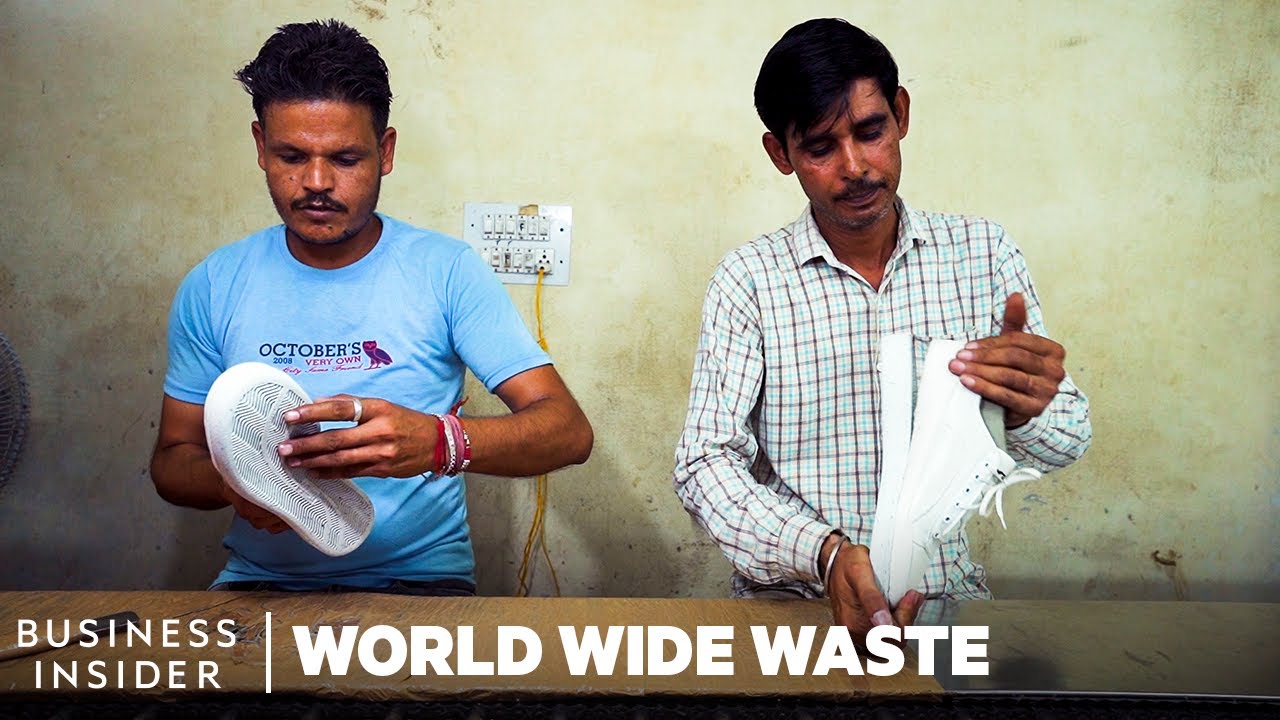 These sneakers are made with garbage. The company that makes them says each pair contains 10 plastic bags and 12 bottles. For $110, they’ll ship them anywhere in the world. But can footwear made from trash compete in the over $70 billion sneaker industry? We went to India to meet the young entrepreneur making sneakers from worldwide waste. 23-year-old Ashay Bhave launched Thaely in July 2021.
Ashay: Thaely because it is the Hindi word for plastic bags.

At first, Bhave struggled to gather materials, even though trash in India ends up in all kinds of places.
Ashay: I assumed that it would be easy to find, you know, waste, plastic bags, but that wasn’t the case. So Bhave partnered with a waste-removal company that hires ragpickers. Those are people who collect recyclables from the street to sell for cash. Triotap Technologies offers them a steady paycheck and an indoor sorting space. They clean the bags in a hot tub filled only with water without any added chemicals and then hang them out to dry. Inside the warehouse, Sairuddin stacks eight to 10 layers of bags at a time.

Then places the pile under a heat press. This finished product will cover most of the sneaker. The company’s founder calls it ThaelyTex.
Ashay: So it’s a material that’s made entirely out of waste plastic bags without the use of any chemicals. Sairuddin packs and ships them seven hours north to the Nitush Footwear factory. That’s where the shoe will be assembled. First, ThaelyTex sheets are die-cut using metal forms. Other patterns are cut from RPET fabric, which is made from recycled bottles and woven into something like canvas. The workers stitch the two types of materials together. The assembled “upper” gets stretched out. Thaely’s soles are made with crumbs of industrial rubber. A worker needs to rough the sole on this grinder so the glue added in the next step will adhere. They coat the top of the sole with a clear glue. A special UV light increases its stickiness. The shoes go through a series of heat treatments and coats to strengthen the bond between the sole and the upper. Then comes the final round of stitching. Thaely’s laces are also made with recycled plastic. This factory employs 170 people and makes shoes for three different companies.
Ashay: We wanted to make sure that we’re still using existing sneaker-manufacturing techniques. You know, we didn’t want to reinvent the wheel.

Nitush turns out 15,000 pairs of shoes every week, and they try to recycle everything, even scraps. Ashay: That’s recycled, and some of it is also reused to make more ThaelyTex sheets. The tote bag used as packaging is made from four plastic bottles, and the shoebox made from recycled paper has seeds in it. Customers can cut the box, plant it in soil, and grow a basil seedling in about two weeks. The company sold 300 pairs of sneakers in its first month and says the shoes are built to last. Ashay: It’s extremely durable. It lasts like any other sneaker for about two to three years, depending on how it is used.

But can a small company like this compete with worldwide brands? Several have launched shoes from recycled plastic in recent years. Nike launched the Space Hippie, a shoe made with recycled materials, in June 2020. Adidas makes a shoe that incorporates ocean plastic. The company says it will produce 17 million pairs of them in 2021. That means it’s likely that a global brand like Adidas sold more recycled sneakers in an hour than Thaely has sold since the company launched. But Bhave is undeterred. And he says the business is already profitable. Ashay: This is a project that is going to fund itself, and at the same time, it’s going to help enrich the lives of the sanitation workers that we work with, and you know, the factory that we work with.

Bhave got the idea for Thaely when he was in business school.
Ashay: We had a “Shark Tank”-like competition in my university, and I had this opportunity to make my design project into a real business idea. He says private investors funded the launch of his business. The name of the Y2K Pro shoe is a reference to the early 2000s. He was inspired by basketball and skate shoes from that era, even though at that time, he had a toddler-sized foot. It seems like Thaely is onto something with the idea of how to add value to discarded bags. Starting in September 2021, Indian authorities required all plastic-bag makers to manufacture thicker bags. The idea is that more durable bags are easier to recycle and that ragpickers will be more likely to collect them. And once a customer is through with a Thaely sneaker, Bhave says they can send it back to the company for a discount.

Ashay: This allows us to responsibly recycle them. We refurbish them, and we’re donating them to charities and refugee camps.