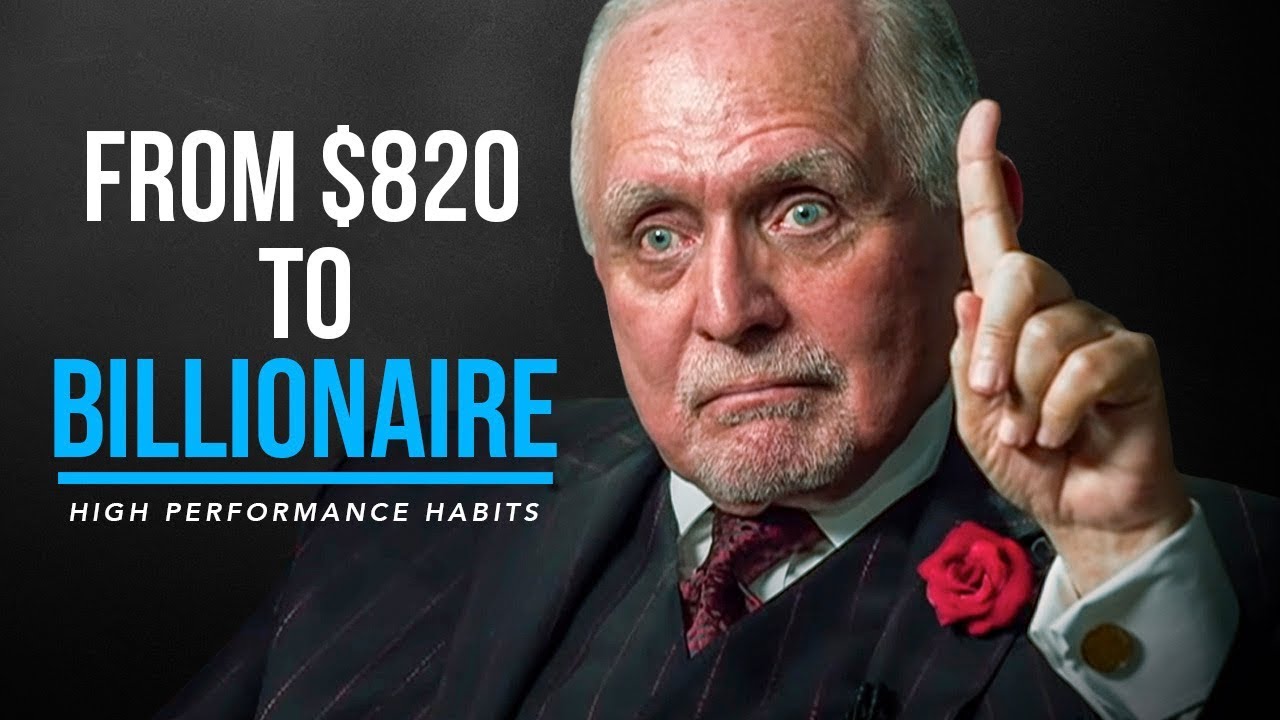 Show me your friends and I’ll show you your future.
Unless you want average,
in America married two point four kids with one and a half dogs
But I can guarantee you
you will never achieve anything greater than your highest aspiration.
If you want a million you’ll make a million
not a $1.5 million.
If you want $10 million, a $100 million
and you’ll never exceed that.
If you change a billion lives,
that’s the formula to become a billionaire and change the world.
Time costs lives.
Show me your friends and I’ll show you your future.
You want to know why you’re all f***** up?
Just look at the bums you hang around with.
I do what you don’t want to do
that you know that you’ve got to do to be where you want to be.
Ted Turner just gave his 75th anniversary party on CNN a few months ago
and he has, he makes a couple of comments and he says number one,
and I’m not suggesting this for everybody,
it’s how I lived though.
The first 10 years of my starting CNN,
I slept on my couch, I didn’t have an apartment.
Bill Gates slept in the office,
Steve Jobs slept in the office
and I can go down a whole list.
Now these are super successful mega-wealthy guys.
I slept in my office,
not everybody is willing to make that sacrifice.
But it’s not the only thing
but even if you don’t want to sleep in your office,
if you want to send your kids to a better school,
if you want to be able to take care of your mother when she gets dementia,
if you want to… this all takes money.
When I…
my children aren’t getting any of my money when I die.
Not not one centavo, not one penny.
And…
Two of my kids are cool with it,
one of them is not so cool with it.
I’m not going to you know, I think Andrew Carnegie
by the way, Andrew Carnegie
arguably the richest most successful entrepreneur of all time.
He said, the best thing that you can have for a child
is him to be born into poverty.
And I agree.
Lack of self-esteem, lack of self-worth.
Now they think they have self-worth,
they think because they made a few bucks
but in actuality,
and when they measure it against the other 8, 10, 12 people
sitting around the table
they realize or they start the question
“Hell, maybe I was just lucky.”
Now all of us,
when you’re only a one-trick guy or gal
think, “Was I lucky?”
Now I’ve done it so many times, I know I wasn’t lucky
I might have been lucky the first time
but I haven’t been lucky the 15, 20, 40, 50,
- I know that. – Okay
But maybe I was lucky the first time.
My life changed when I went, I was a pretty much…
a haphazard kid got in a lot of trouble,
got arrested 4 or 5 times,
thrown in jail
and this was with my dad as a cop.
But then I went, I volunteered for the draft in 1966
at the height of the Vietnam War
and I went to OCS and that changed my life
because it was the really first real high performance thing
that I could measure myself against, with other people.
Two-thirds of all Fortune 500 CEOs have one thing in common
- military background. – Really
Two-thirds of those two-thirds have something else
Martial Arts.
What do you learn in martial arts Brian?
Discipline, focus.
A lot of people don’t believe they deserve to be there
I convinced them
and we have these drills, why you belong there?
A lot of people that come there,
you know with money that have made money
think they made it by accident.
I just had one of my super stars whose made a hundred million bucks
tell me in the last week,
“You know,
I’m not sure I’m going to have another lucky accident.”
And I said, “You did it.”
I mean, you know, you tried a lot of things.
Thomas Edison, I would, I wouldn’t have done it 10,000 times.
I would’ve hired an engineer from MIT to do it.
But I mean, I’ve tried a lot of things
nobody’s failed at more things than I have
and the first 100 million are successes
but I could write a book about failures that’d be
I mean because I’ve tried a lot of different things
because failure is just testing
and one of the reasons I’ve been so successful
in generating this equity and value in my kids

is because I convinced them that making a mistake is okay.
Your parents probably told you
you can be anything you want,
but you can’t.
That’s ***.
You can’t.
If it’s all juxtaposed
So but what you tell them is that
you can do anything you want that you have passion for.
Because that eliminates most of the crap
because most people don’t follow their dream,
you know, like they say in the sound of music.
“You can’t have a dream come true unless you have a dream”
Now I still dream,
I dream in technicolor,
I say my affirmations and goals every single night.
It’s bloody hard
to be a high-performance person.
Perfection equals paralysis.
If you left it to the engineers,
no car would ever come off the assembly line.
No car would ever come off the assembly line
and I’ve been in business with enough engineers
that I can tell attest to that with my hand on my heart.
They’d still be…
Trying to make it better
and the internet business is very much the same.
The internet kids want to test and test and test
and they will want the landing page to be this
Just roll it out,
the great thing about the internet is your results are instantaneous.
If something that I’m overseeing at a Concorde level 60,000 feet
doesn’t work in two days
forget about it move on.
And today I had our meeting
now the young kids are,
“We ran it three days sir, and we closed it down.”
And they are thinking I’m going to ask why
I said, “No, that’s fine next”
Because without them making mistakes,
and without them being allowed to make the decision they never get any better
and 95% of the time I know probably better than they do,
We’re never going to be able to know everything
or have them know everything unless they make some mistakes
and get comfortable with making mistakes.
What gets measured gets accomplished.
Without measurement you’re just fooling yourself.
Before I had any money
I used to go to the Rolls Royce dealers and sit in the cars and smell the leather
touch the leather. Okay
I went to million dollar houses
and my wife and I would walk through the house
and they’d say, “When are your parents getting here kids?”
“No, we are the buyers.”
Practice within when you’re without.
Practice being successful.
How many people listening to this today practice being successful today.
Through affirmations,
through going to the Rolls Royce dealer.
Maybe Lamborghini, maybe something else.
In my particular case it was Rolls Royce.
And within a year of me going to a Rolls Royce dealer, I had a Rolls
Okay
Within…
19 months of me dreaming and…
adding it to my goals a castle on an island,
I owned Guthrie castle.
- 19 months – Okay
Go to stores you can’t afford.
Go hire lawyers, you can’t afford.
Lawyers will meet with anybody,
accountants will meet with anybody.
Go to the big four accountants.
With a business idea,
the first couple meetings are for free.
Jettison, probably a lot of the people you hang around with.
If you have poor public speaking skills
join Toastmasters.
Do these.
If you go, if you went to a good school
and you’re not successful, go to the alumni deals
Okay
I didn’t go to a good school, I’m a perfect living example that
a lot of trouble as a kid,
working-class background, my parents,
went to just a mediocre university
that I flunked out of three times before I finally graduated with honors, but…
And I had no money to begin with, $820
So it’s all possible
But I, you know, I devoted myself
to feeling successful.
I was wearing suits like this, before I could afford them.
Most people procrastinate because they’re unsure.
So just do it.
And, but I’ve never had a problem just doing it
because one of the things you learn as a young combat,
infantry officer is
time cost lives.
We over analyze because we’re unsure,
we’re not- over analyze,
we don’t over analyze because we are not sure.
If it will work or not,
we’re more worried about on the emotional side
it embarrassing us.